Fresh from the typeface

The latest update of What You Ask For... 2012 Nanowrimo winner and a continuing work in progress is now available at Smashwords, here, and keep up with the story. Free to download from Smashwords.

Putting a novel out has its moments of sublime delight and mild frustration, working out how to get the word out, wandering through the labyrinth of the Internet, a whole host of things and then suddenly when you least expect it - music to your ears!

Excellent, couldn't put it down - simple words that writers dream of hearing. I heard them this week; Control Escape - the second Grange novel - was holiday reading for a friend of mine and the text after touchdown was "Control Escape Excellent" an honest unsolicited opinion. So here's the rub, don't take my word for it or his; check it out for yourself - a page turner you can't put down for the price of a decent cup of coffee, in fact try both of them Iceline and Control Escape for two cups of coffee.

If you're in the mood for something raw and closer to the typeface, where the words are being mined, try What You Ask For... - it started with Nanowrimo last November and the work progresses - it's a freebie download - while the construction work continues.

Bring your own coffee, or slide them from the Internet onto your favourite reader via the WiFi at your favourite coffee shop. Traditional British Thrillers with the flavours of John Buchan and Jack Higgins, a touch of crime and mystery stirred into a brew you will enjoy as much as your coffee, available from Smashwords, Apple iTunes, Diesel, B&N, Kobo, Sony.

A little bit of tweaking going on in the corners, two new links have just been added, making the connections between here and other places where I can be found hanging around on the internet. Links to, at the right hand side, click on the relevant link and it will transport you to my web site at www.cheekyseagull.co.uk and my Smashwords profile, the author page at Smashwords where you can check out my current published works.

The website has pages for each of the books, including What You Ask For  is a work in progress, and is free, available through Smashwords. Iceline and Control Escape continue to be available at the major eBook distributors, Apple, Barnes and Noble, Sony, Kobo, Diesel.

Less than on hour left on the Christmas offer for my ebooks at Smashwords, the clock stops at midnight for the discount coupons, SZ97D for Iceline and XQ53N for Control Escape. What You Ask For... the 2012 Nanowrimo winner will still be free to download as a work in progress.
Posted by Martyn at 11:14 pm No comments:

Worth a look at - reposted from Smashwords blog

An interesting review of the last twelve months from Mark Coker founder and inspiration behind Smashwords, a lot of  thought provoking stuff in there on how he sees independent publishing developing, and the value of the potential in the writer. Have a look for yourself;

Smashwords: Smashwords Year in Review 2012 - The Power in Publishing is Shifting to Authors
reposted from Smashwords.blog

Our authors know that every writer – every one of us – is special, and those who doubt this truth will become the dinosaurs of tomorrow.  You can’t truly honor the culture of books without honoring the writers who create them.  You can’t truly honor the value of books if you measure their value by perceived commercial merit alone.  You either value the human potential of all writers, or none at all.
Mark Coker CEO and founder of Smashwords.


I am biased, I am a Smashwords distributed Indie Author; you probably guessed that already.

Time flies when your head's buried in the shifting sands of the internet. www.cheekyseagull.co.uk has just had an overhaul, not specifically for New Year. There were one or two things lurking off line that needed a push forward and are now up with rest and revamped links pages for the various ebooks available through Smashwords et al,  -all the usual suspects.
Posted by Martyn at 4:59 pm No comments:

What You Ask For - update 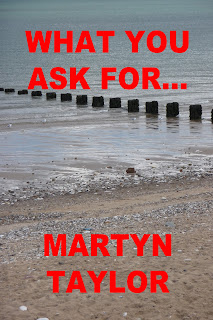 What You Ask For, my entry for Nanowrimo 2012 - and a winner - 50,000 words in less than 30 days - had just been updated at Smashwords. It's been a few weeks since the last one, but the diary is clearer now and the fingers are loosening up for another marathon run, complete the first draft by the end of January. Catch up with the story at What You Ask For... and we'll take it from here shall we?

Posted by Martyn at 2:16 am No comments:

Control: Escape - take a look inside

Control: Escape is the follow up to Iceline, with more about life at the Grange, Bill Jardine, Don Steel, Josie Burke and introducing a few more characters.

Steve Arkwright is the guy who fooled around nipping over firewalls to see what was on the other side, until the men in suits made him and offer. A well paid job with security is just another form of prison, with ever shifting bars, until a way out becomes available.  Try this for starters, and read on...


Malcolm Baker touched a finger to his lips and slid it across his throat as he sat down and lobbed his cap on the desk. Bill Jardine reached under the desk and flicked a switch. “Sound is off.”
“Thanks.” He unclipped his tie and unbuttoned the collar of his shirt.
Jardine leaned forward and pressed call on the intercom. “Josie, coffee for two, large Thermos, and if anyone asks I'm not”
“OK Boss.” The speaker crackled and he released the button.
“I’m imagining all this?”
“Very lucid dream,” Baker grinned and sat in the buttoned leather chair. Jardine closed the file on his desk and creased the spine with his thumb before he put it away in a drawer. “Out with it then, what’s the problem?
“Not certain you can help. That’s why I'm doing this quietly.”
“Seven thirty and in uniform, wouldn't call that quietly.”
“Uniform makes me invisible, so who cares about the time.”
Josie came in with the coffee on a tray. Two heavy mugs and a two litre pump action Thermos flask; milk and sugar. Jardine pumped the coffee into the mugs, spooned two heavy teaspoons of sugar into one and handed it to Baker who stirred it well.
“Go on,” Jardine waited until Josie had left the room, “what’s happening.”
“I have a problem with your old firm, Hoplite; I’m working with special branch on their latest project because we think it may have policing possibilities.”
“Why not take it up with Michael Spear?”
Baker scratched the side of his head. “That is the problem; he may be implicated. There’s a security breach somewhere in the company and I can’t find it yet, I have my suspicions but nothing more at the moment.”
“And you want me to spy on my best mate?” For a moment Jardine’s voice carried the accent of his childhood in the north east. “That’s asking a lot.”
Baker drank a mouthful of coffee and gave himself time to think. “No, I don’t want you to spy on him, look, I want to help. I can’t really believe that he is tangled up in whatever is going off, but I have to be sure, and for that I need to know more than I do at the present.”
“Alright, but how can I help?”
“It may not amount to anything, but if Michael Spear drops in can you talk to him, see what you can prise out of him and persuade him to talk to me at least?”

Find out more on my author page at Smashwords.com and www.cheekyseagull.co.uk for links to major ebook suppliers, available through Apple, Barnes and Noble, Kobo, Sony Readerstore and Diesel ebookstore. Discount coupns are available at Smashwords, via cheeky seagull until the 6th of January.

Iceline - the first novel of the Grange stories, introducing Steel, Langhers and the rest of the team from Bill Jardine's country house operation tucked away in the Oxfordshire countryside -  here's a taster, read on...

He slumped against the wire binding and the metal chaffed his skin drawing blood. He shivered as the draught skittered under the door of the barn, prowled around his feet and gagged on his own stench and vomited a thin dribble of bile. The spasms stopped and he heard the scuffling footsteps in the yard outside and the heavy grating of the barn door as it dragged across the stone. Thick fingers grabbed his hair and wrenched his head back and a voice whispered with the crispness of dead leaves. "Still with us?"

The pain flared as a thick leather glove wrapped with barbed wire punched him in the face. The agony dulled and he went limp, his mind on the edge and his breath ghostly and shallow. A grimy thumb peeled back an eyelid and showed the whites before he passed out and pissed himself.
"Cut him loose."

Pliers cut the wire and limp as a rag doll he fell to the floor where they dressed him in old jeans and tee shirt and dragged him outside. His nostrils twitched at the stink of cigarette, stale body odour and old after shave. He hung loosely as they hauled him across the yard and through a gate and dumped him on the grass and he curled into a foetal ball. He heard engines and rotors. Loose stones and vegetation were whipped and hurled around by the downdraught as he was hauled into the cabin and the helicopter clawed its way off the ground and moved off, skulking across the landscape. Later he was manhandled again and pushed out, tumbling through the darkness and the scream rising in his throat was smashed from his body as he hit the ground and then nothing. Darkness inside his head was like the night that lay across the mountains under a moonless sky and a thin dusting of cloud veiled the pale light of the stars. He rolled into a shallow ditch where a trickle of water lapped against his face. Hours later cold grey daylight unrolled across the landscape with a faint overcast and mist lingered in the hollows soaking his clothes. Exposed to the elements he lay in the ditch while his tongue sought out the water and lapped it up. The sun burned as it climbed over the hills and he shivered through the night to a second morning....

Find out more at Smashwords.com and www.cheekyseagull.co.uk for links to major ebook suppliers, available through Apple, Barnes and Noble, Kobo, Sony Readerstore and Diesel ebookstore.