I started thinking about an old game earlier; where items are concealed in cloth bags and identified by touch, others are in jars and have to be picked out by taste or smell, and the train of thought trundled down a branch line and I wondered about myself.

My first books strayed on to the internet via Smashwords in August, a blast through November started the next one, What You Ask For, available as it was written on the Smashwords Nanowrimo page. Having someone downloading and reading the draft as it appeared on Smashwords took a bit of getting used to, but I enjoyed the buzz. The earlier titles have all appeared on the various channels where Smashwords distributes to. (Not Amazon - technical issues).

Find the book was the challenge in the first weeks after publication, tracking down the page on the site where they arrived for sale at Diesel, Kobo, Sony, or wherever. Eye-balling the cover design on each site; it was the description at Diesel that caught my eye; Indie Author.

I smiled at that, to me it has a cool ring to it, but I guess there will be many reactions each one coloured by the perception of the individual.

Why do I think it is cool? It's the word independent, indie, (there's a nod to Indie of the Indiana Jones stories). It has the edge of a maverick, a loner, the character who rides into the dusty town and sorts out the mess and then rides out again, answerable to no-one. That's the key!

Answerable to no-one. It's the crazy who sticks their neck out and does something with no safety net and nobody to blame if everything goes pear shaped; I did It, it was me! An acceptance of personal responsibility.

At the end of the day, there is a book, checked and proof read, formatted with a cover design and out there for you the reader.

The books are for you, Reader, and at this time of year I can echo the words of Dickens in his preface to A Christmas Carol; that they shall not put you out of humour with yourself, each other, or with me. Should they be enjoyed at this holiday or later in the year when the sun reaches into bones chilled by winter, as the days lengthen, and warm evenings and cool drinks beckon us out of doors. Enjoy them and share them with your friends.

Smashwords: Apple iBookstore Sales Surge Over Christmas Holiday
re posted from Smashwords.blog.
As a Smashwords author with books on Apple iTunes I found this particularly interesting. There is a lot of attention given to Amazon and Kindle ebook sales but Apple moves quietly; Smashwords distribute to Apple and the iBookstore is now available in 50 countries.
Apple people can find my books here and here on iTunes. Apple has an established working relationship with Smashwords.
Posted by Martyn at 11:39 pm No comments:

Psst, pass it on -
Tinytown by Darby Gallagher.

Brilliantly funny look at greed, power and corruption in high places; this is England 2050. Dark and witty, blending the macabre, chicanery, and deception sprinkled with some side splitting descriptions and one liners. Overcrowding has brought in size insurance and failure to meet the payments gets you shrunk and sent to Tinytown.  A diminutive hero, a love interest, an ex-wife in pursuit of money and her brother, high up in Sizewise, the company behind Tinytown and the Human Shrinking programme; dodgy characters, knuckle dragging henchmen and sharp dealing. Climaxing with a chase through London on the day of the Royal Wedding,  and a celebrity children's TV star in costume dragged from a car smothered with sticky toffee and drugs, live on global TV.
The best read I've had in a long time, and I'm keeping an eye out for Darby Gallagher's next novel.
Posted by Martyn at 10:30 pm No comments:

Tools of the Trade 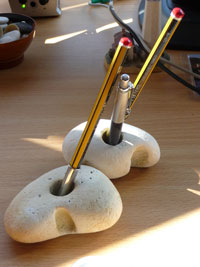 Basic Equipment, you don't need anything else. A simple ballpoint pen and a pencil, and of course something to write on.  The page, plain, squared, ruled narrow, ruled wide, feint, take your pick, and I still find the hardest part is where I look at the blank page and suddenly the inside of my head feels the same, a blank expanse of white. Nothing there, not even the faintest glimmer, or the merest scratch on the surface. I love it, that moment when I make the first mark, and then its gone, the pristine surface is marked, and there is no going back, to remove every trace of that mark would be impossible, but why would I want to, the first mark is the step that starts the journey. It may be hesitant at first and get stronger later as the road ahead becomes clearer and the characters start to develop and prompt there own actions and reactions. I have to admit, I hate planning novels, all the time I spend planning, well, have spent in the days when I thought you had to plan everything I couldn't wait, I wanted to tell the story and finding out that a number of successful novelists had the same feelings was reassuring, now I just leap into telling the story and then work out the finer details when the first draft is finished, but I also like a first draft to be readable enough for anyone to pick it up and see what's there. It has to make some sort of sense.
There is no turning back, always forward, without reverse. Changing direction is optional, and when the story starts to bog down it becomes almost mandatory.
Doodle mentally and see where the story takes you, that's what I'm about to do, no choice really. the latest story is a bit stuck in the woods somewhere, and maybe I can't see the wood for the trees, and that brings us back to basic equipment, a ballpoint pen and a pencil, graphite wrapped in cedar wood. I have my favourite, Staedler, the yellow and black ones. I like them nice and sharp too, leaving a nice crisp line on the paper. Beautiful.
Posted by Martyn at 12:59 am No comments: